A recent discovery from old backups revealed something long forgotten: I really developed a version of Elite for…. that’s right… Emacs text editor. 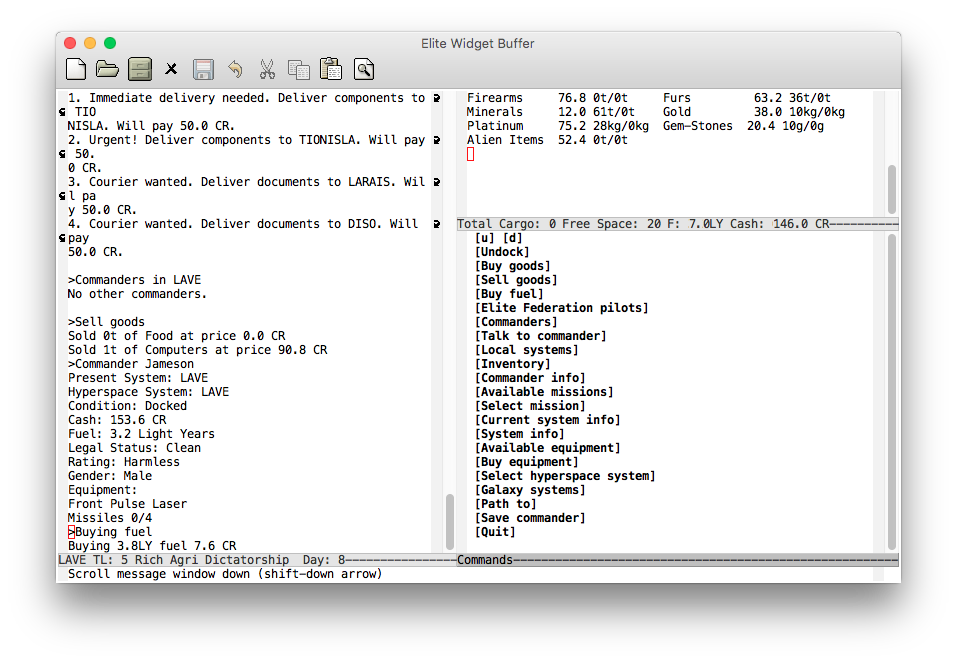 Update: Elite for EMACS is available as Docker container.

It was over a decade ago, during 2001 – 2003. Source files have dates May 2003 and after that all development ceased and everything was forgotten until I found the backups. I still have the domain and web site: elite-for-emacs.org (update 2019 no more…).

This does take me back… There were two reasons why I made Elite for EMACS. The first was that I found C-source for original Elite trading, published by Ian Bell. And the second reason was that I was really into Emacs editor at the time and I had chosen my side in the holy war of editors. Over time, however, I’ve changed sides and I’m mostly backing Vi-editor and I don’t remember much about Emacs anymore (maybe that makes me a traitor…?).

Oh, and of course, there was third reason as well: I really liked the old Elite games, and now I like the new Elite: Dangerous (see images from my travels).

So how do you make a game for a text editor? Because Emacs uses Lisp and I was into Lisp coding as well at the time. I still remember a little about Lisp and the code that I wrote all those years ago.

All the source of Elite for EMACS is available here: https://github.com/samisalkosuo/elite-for-emacs. Everything is as I left it over a decade ago. Source code license is the MIT license for my own code but full copyright of all original C code belongs to Ian Bell and David Braben. And I emphasize, I make no claims whatsoever to have written original C code or to hold copyright or to license them in anyway. I only translated the code to Emacs Lisp and really, really make no claim of any kind to the original code. If in doubt what code belongs to me and what not, compare original code with Lisp code. Also any names/etc. from Elite/Frontier or from any other source are from Elite/Frontier or any other source and I make no claims that they are mine. If you know that something is from Elite/Frontier or other sources then they are and they are not mine.

There are two versions of Elite for EMACS, in the GitHub they are elite-for-emacs-V1 and elite-for-emacs-V2. During the development of V1, I must’ve got bored with UI or something and then started V2 with totally different, shell-like, UI. But I never did much of V2 and it was in very early phases when I ceased all development.

Thousands of lines of LISP code make interesting read, and nostalgia made me dreaming of continuing the development but that will not happen. The code will remain as it is. At the time of writing, the code seems to be working with current Emacs version (GNU Emacs 24.5.1).

Reading the code shows that I had interesting ideas for the game :-). Excerpt from the README file:

Did you notice “procreating” :-)? AI commanders and player can have offspring. I wonder when that will be available in Elite: Dangerous…

I had lot’s of other ideas as we can see in the following excerpt from the todo file:

I also had plans to do online multiplayer:

Here are some screenshots from the game: 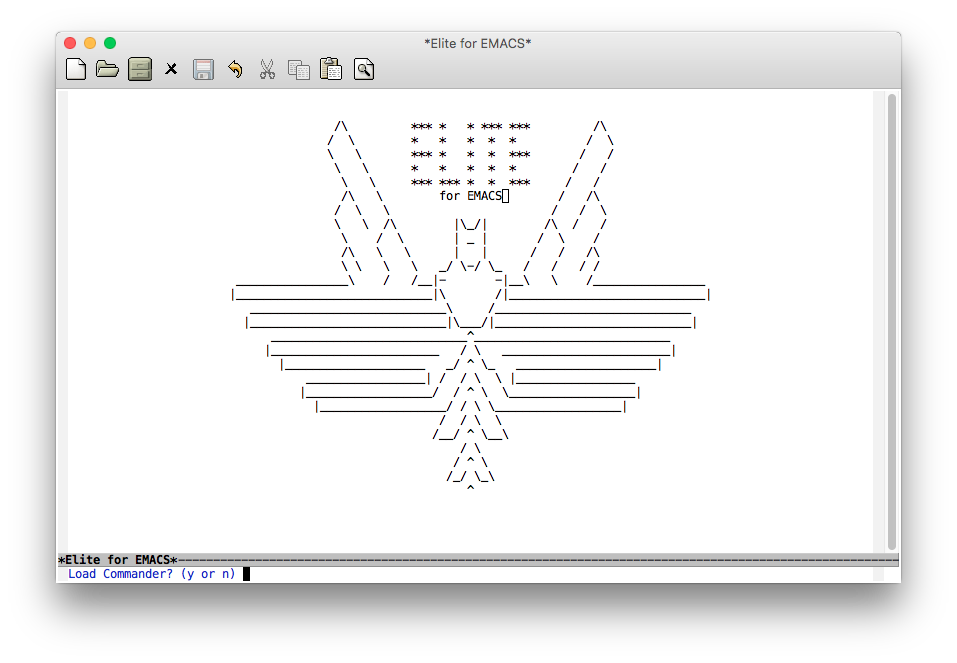 In LAVE. There are other commanders here. Do you know Edmund Blackadder? 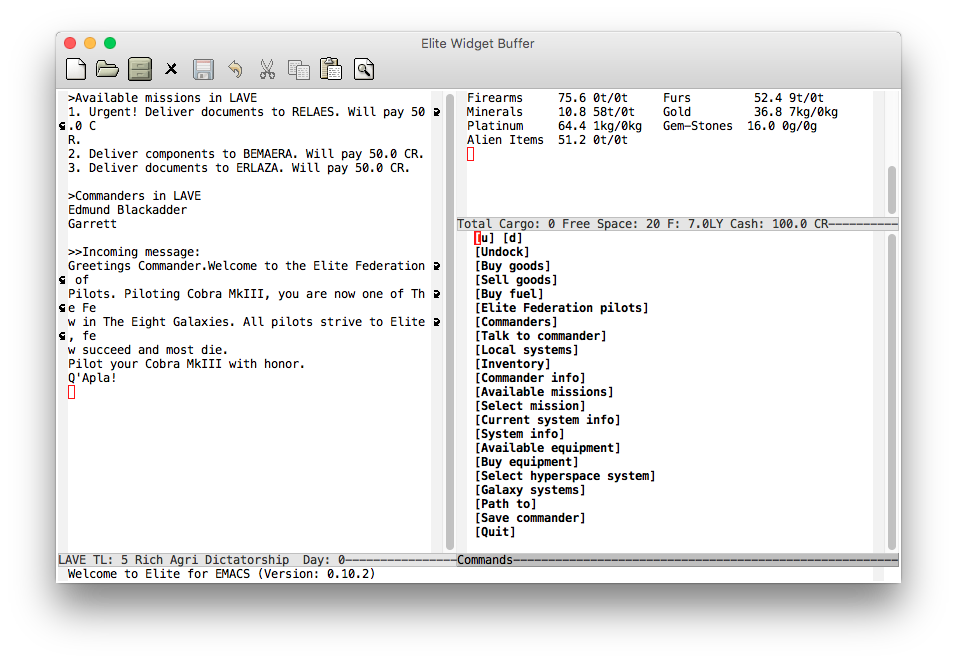 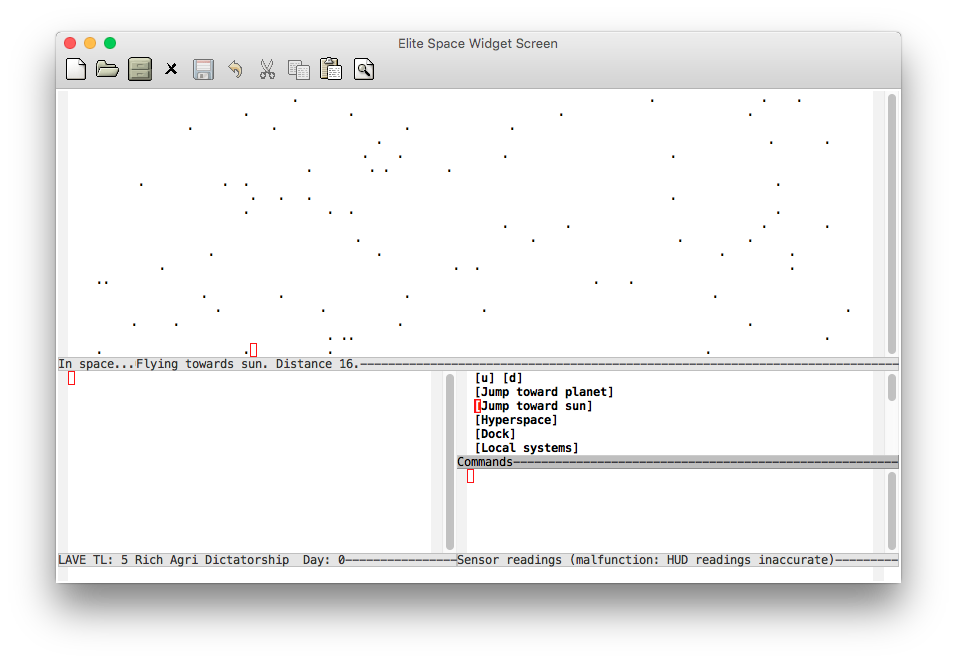 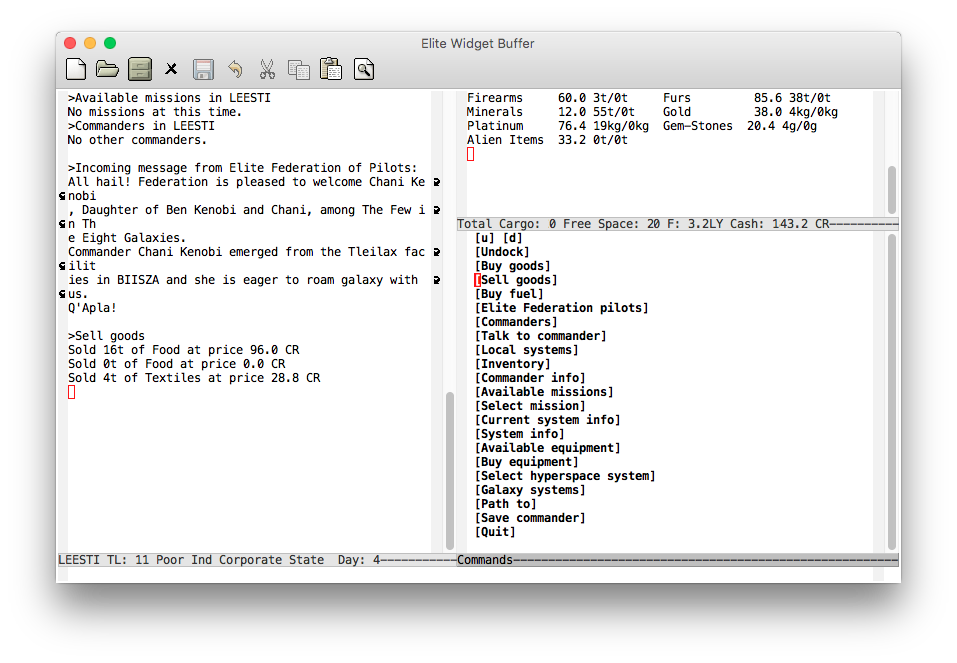 Bought computers and back to LAVE. Encounter with friendly trader… 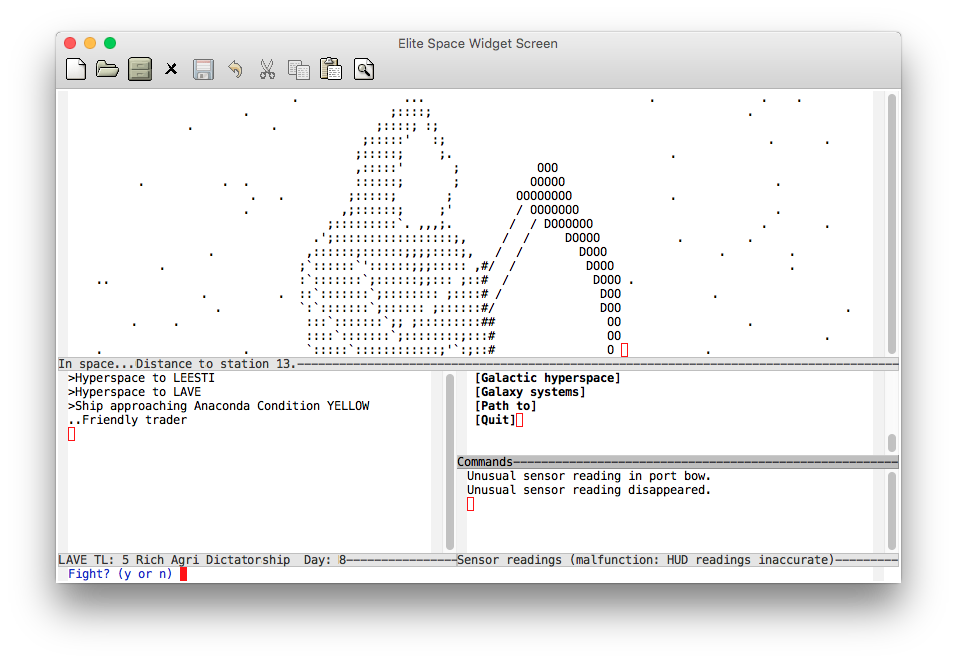 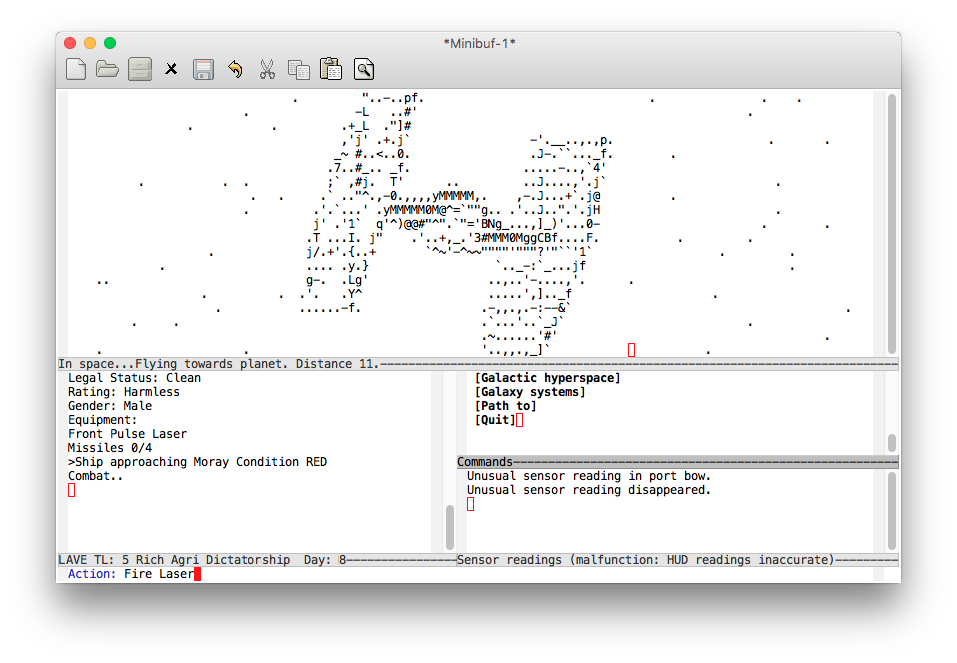 Back in LAVE. Sold computers and profited a few credits…

Playing Elite for EMACS after twelve or so years made me smile. A reminder of days long gone…

Welcome to the Elite Federation of Pilots.

Piloting Cobra MkIII, you are now one of The Few in The Eight Galaxies.

All pilots strive to Elite, few succeed and most die.

Pilot your Cobra MkIII with honor.